An omen (also called portent or presage) is a phenomenon that is believed to foretell the future, often signifying the advent of change.[1] Though the word “omen” is usually devoid of reference to the change’s nature, hence being possibly either “good” or “bad,” the term is more often used in a foreboding sense, as with the word “ominous”. The origin of the word is unknown, although it may be connected with the Latin word audire, meaning “to hear.”[2]Wikipedia on omen

Man has limited faculties, nay only to the five senses, so he relies on the wisdom of omens and their meanings. We are saying this because when we awoke to take on our graveyard shift at our place of work, after midnight (12:30 a.m.), July 9, 2012, we looked up the night sky to discover not one but TWO overlapping moons. This is the second time that we saw two moons, the first one was a bit nondescript because when we pointed them out to a friend, he said that there was no such thing.

This time though, we had our camera, so we clicked away. Here are the results. 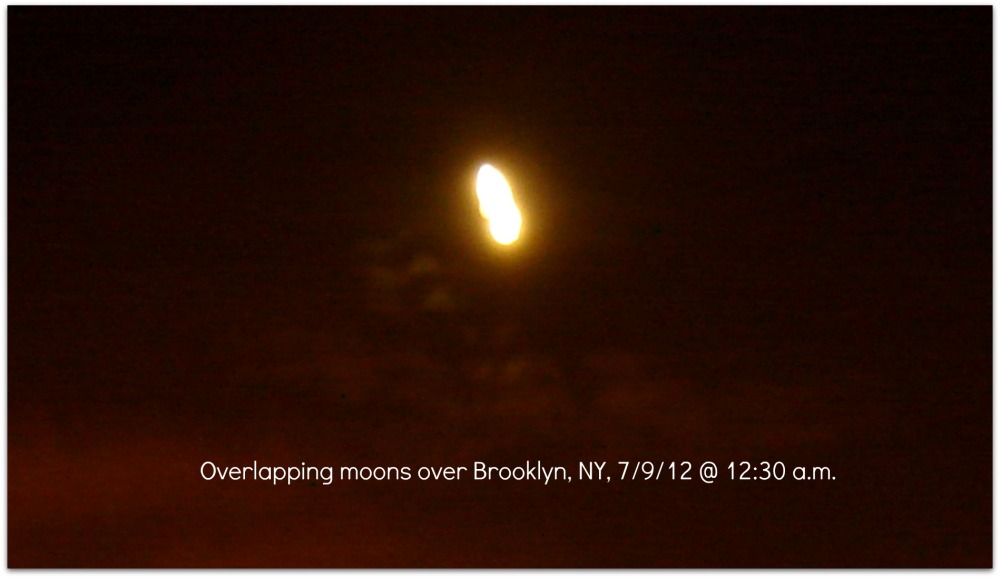 We would not discount omens because, if anything, many a time have we encountered them. The one on August 27, 1997 holds a special significance and poignancy to us. We were in the process of bottling coconut wine for delivery to our publics, when all of a sudden ALL the bottles in the first batch cracked from the bottom, spilling out the contents. We knew it was as bad an omen as omens go, so we stopped working. Well, mother had a stroke 12 hours later and never recovered, giving up the ghost on the seventh day, September 3, 1997.

We wonder then what event or events are forthcoming with the overlapping moons?