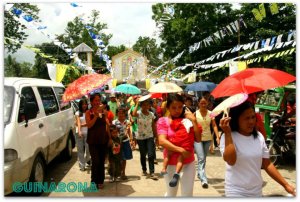 The patron or fiesta is a big party for the barrio, town or city. One year is allotted to making preparations for it. All the more if you are the big shot, the premier host of the event. Being so does not mean that you have to feed all guests, only that you shoulder most of the expenses, the likes of defraying the cost of the expensive Pontifical Mass–it has to be pontifical to punctuate the fiesta with exclamation marks; ditto sponsoring the fiesta games and cultural shows.

If you are so inclined to be an Hermano, you have to present yourself, say five years before your object year, because the roster of hermanos is filled up five years down the road. At least that’s the case with being one for San Pascual Baylon Han Guinarona.

As for the ordinary folks who are not hermanos, the work is not the least tiresome either:

To us, the Guinarona Fiesta in the Philippines, is the event.   Not even Christmas comes close.  Although the fiesta is too much work, it’s a miracle that we go through the rigmarole with high spirits.  Having a huge house to clean up in preparation is no joke either.  Like two weeks before May 17, we would clear awnings, alcoves and exteriors with escuba–really a cluster of woody weeds bunched up like a broom, but with a long handle, the better to scour every nook and cranny.

And boy do we have to apply tons of red wax to the wooden floor, then polish it with a million strokes of the bunot.  But then what happens is that your floor becomes a sad spectacle with the fiesta traffic.  It’s like, why do we have to clean up, polish up with all the mess afterwards?  Aren’t fiestas crazy?

Then participating in playground demonstrations is de rigueur.  Else San Pascual Baylon will punish you.  Yeah, right.  But we believe the admonition, having experienced, albeit excruciatingly, a cut in one’s sole, after having bailed out of the Sailor Dance, choreographed by Mama Aning Martinada.  Others would go the zarsuela way, like emoting while singing, this time coached by Tata Anli Martinada–yes, the Martinadas have that artistic touch.

The ante-vesperas–that’s when we start to really go hang.  First the making of the kurukod,moron, and binagol– all labor intensive–and you will perspire a lot doing so.  Especially extracting the pure coconut cream for the binagol the see-saw way.  But wait, the manual grating of the coconut is something else.  (The making of the papaya atchara, also labor intensive,  should be at least two weeks before May 17, so that the atchara will have been aged by fiesta time.)

Helping hands from our coconut farms in the hills of Guinarona would also come down on ante-vesperas, their shoulders laden with coconuts, banana leaves and young leaves from the coconut for the kurukod; ditto for a hundred more items. It is amazing how camaraderie is established while doing these chores. (Until 1972, Guinarona was not juiced or electrified.  So we relied on four petromaxs at a time for illumination.  Nonetheless, pumping up a  petromax leaves you panting too.)

The morning of the vespera (May 16),–that’s the time we make the obligatory tortas (muffins), with Auntie Tansing orchestrating. We remember one hudno or batch being eaten up by the flames, Mother having used an aluminum sheeting for the top embers of the oven–which melted and gave way–and which made her cry a river.

Then May 17, the moment of truth comes, and this time we are just too tired to even care.  We just go with the flow, not even eating properly, however laden the fiesta table is.  Sleepless and tired.

One thing great about fiestas is that it’s the time that you see old friends and relatives, reconnecting with them, comparing notes with them.  We remember Senator Raul Manglapus advocating the abolition of fiestas.

Of course, he was skinned alive.

Manila-based Mario Engracial is this year’s hermano for the 110th Guinarona Fiesta for San Pascual Baylon, May 16-17.