Thoth, the god of wisdom and knowledge, is perfect and precise.  It is said that Thoth constructed Egypt’s great pyramids all by his lonesome–that is, in the fourth dimension, where one can create/manifest things out of thin air.  Then he brought down his masterpieces to earth, in the third dimension.  Note that the pyramids were constructed from the top, that is from the apex, defying gravity.  Which no extant technology can ever duplicate.

Thoth is also the originator of the Sacred or Divine Ratio, which is the template for all creation.  You would think that the perfect ratio is one to one–but no, it is not, on account of the units of duality, i.e., male and female.  More often, the male is the dominant force, so that its share of power is different.  The male represents logic, precise measurements; the female the subtleties, the shades of gray.

A presentation of the Divine Ratio (From Math is Fun): 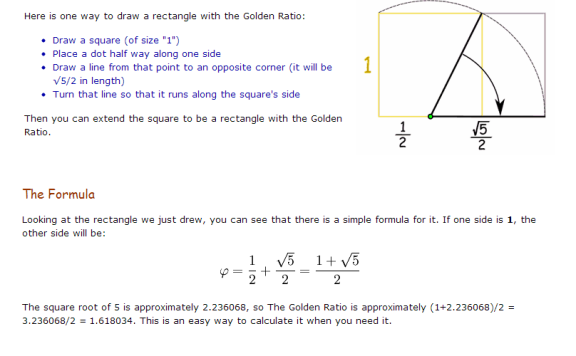 Expressed as percentages, the Divine Ratio is equal to 61.809%/38.200%. Since this ratio is the basis of all creation, if we adhere or keep close to it, shall we be able to achieve an enlightened governance, an enlightened way of life? The answer is YES, and the secret should be out.

Supposing we come up in our gray matter some product. First we identify the major dualities, the yin (female) and yang (male) and assign one as the numerator and the other the denominator. Our formula then, should adhere STRICTLY to the Divine Ratio, and theoretically, it will be the basis for us to soar to heavenly heights. Our product, then, is a PERFECT offering to the gods and a perfect product for the marketplace, based on the principle of,  “As above, so below.”

For example, if we examine the coconut, the weight/density of the coconut meat and the specific gravity of the coconut water adheres to the Divine Ratio, if close. Now, if we conjure/invent a product involving these two components, we have to make sure to adhere to the same ratio all throughout the manufacturing process.

And if everyone adopts the Divine Ratio as a life template, therein lies a fulfilling and enlightened life.

Because Thoth was not, is not, and never will be, wrong.