Or The Monumental Razing of Guinarona by Supertyphoon Yolanda (International code, Haiyan)

Epic, horrendous, terrifying–we can exhaust all the superlatives of the English language to describe the power and punch of Supertyphoon Yolanda, which made a landfall in Dulag, Leyte, at 6:30 a.m., November 8, 2013. On the map, Dulag is opposite Guinarona and Burauen, and the monster typhoon’s gales, circling devilishly around its eye, smothered everything in its path, hence the utter devastation to a huge chunk of Leyte island. The supertyphoon coasted along Leyte’s eastern seaboard, northwest, towards Palo and Tacloban–the epicenter of the devastation (cf. NASA map).

Yolanda was the most powerful cyclone ever to make a landfall on earth, with gusts of 235 miles per hour and sustained winds of 195 miles per hour–and it so liked Samar and Leyte that it gave us this early Christmas gift–albeit a thankless and a super destructive one. Yolanda’s wrath was fast and furious–it was over in two hours, starting at 6:30 in the morning, November 8. So furious, in fact, that the all seas were agitated to the point of spilling out a storm surge (more like a 16-foot tsunami were it not for the semantics of the whole shebang)–people did not understand what was the deal with the storm surge, and they just shrugged off the warnings and stayed put–which explains the dead bodies washed away inland and out into the sea.

A slide show re Guinarona After ST Yolanda. Photos by Hansel Cardante.

A catastrophe of unimaginable proportions has just visited Guinarona and the Visayas region in general. Yet, with the world’s help and encouragement, we will rise from the ashes, as it were. 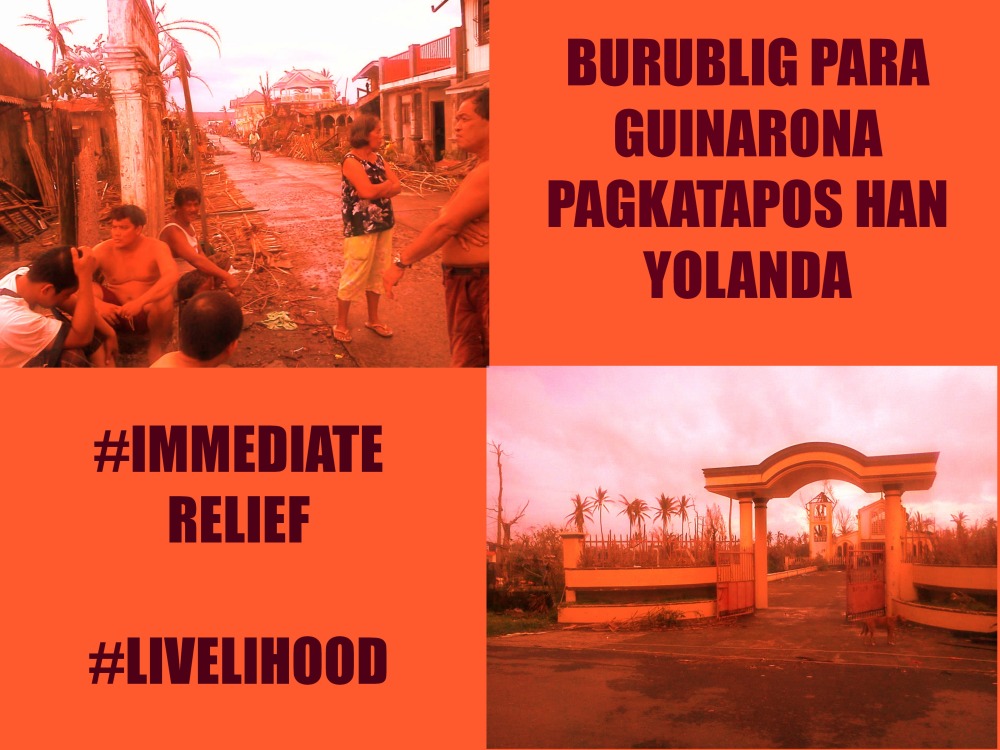 Do join us in our relief and rehabilitation efforts.